Today I get to bring you a very special guest post from the author of the Lila Gray series, Jocelyn Adams. She is here today to tell us a little bit about her new book Shadowborn.

That’s the question Lila Gray asks every time yet another bad guy tries to destroy the earth, and she learns she’s the only one who can stop it. Once again, something’s on the prowl, leaving hundreds of comatose, soulless victims in its wake.

Couldn’t the deadliest assassins of the Otherworld go after someone else instead of the brand new Queen of the Seelie? One who still hasn’t adapted to her new role.

Lila would ask Liam Kane, King of the Unseelie, for advice, but something’s off with him, too. He’s holding back. In some way. About some thing. In fact, he refuses to tell her what’s going on.

The truth holds Lila back from the greatness of her role—the people she was born to lead—the man who she desperately loves—and the solution to the latest war raging around her.

To find the answers, she’ll need to fight through her own darkness and embark on a journey through her psyche.

If she doesn’t succeed, the Shadowborn will claim not only her world, but her soul.

Puchase Links can be found here: Amazon Barnes and Noble

Also don't forget the first book in the series, The Glass Man, links can be found here: Amazon Barnes and Noble


Thanks, Ali, for allowing me behind the controls of your blog today while I celebrate the release of book two in my Lila Gray trilogy, Shadowborn. I’ll do my best not to be a crazy driver … er … blogger. *snort*
I’ve had a few folks ask me lately—Why the fae? My answer is always—It’s complicated.
Let me explain. Or try to. Sometimes even I don’t understand how I work. 
I had a dream one night about a crazy stalker guy with ice blue eyes. You guessed it, he became Parthalan, the villain in The Glass Man, and the driving force behind book one. A little corny, but yes, it all began with a dream in my twisted mind.
Mid-way through my mad dash to write the book—I wrote it in fewer than six weeks—I realized I had to explain what he and Lila were. Does it shock you that I’m that much of a pantser? 
I considered all of the options: human sociopath, vampire, shifter, alien, something all-together new. Human didn’t work for me, because I needed him to have abilities no stock human could have, so I kept the sociopath part of that idea. I wasn’t ambitious enough for my first book to create an entire race, so I tossed that out to the curb. Okay, so I’m lazy, I admit it. *grins*
Next I looked into the lore behind a lot of the supernatural races and nothing quite fit what I had in mind for Parthalan. Since I’ve developed an interest in Celtic mythology since my kilt-wearing hubby is of Scottish descent, my mind went in that direction. ;) That and Google eventually led me to the fae. And that led me to the main theme in most of what I write: the struggle between light and darkness.
I’m a firm believer that we’re all capable of good and evil, and the fae had that distinct division with the Seelie and Unseelie Courts. Even given the physical division of light and dark, light doesn’t always equal good, and darkness doesn’t always equal evil. It’s not a unique theme, but a strong one. It really worked for my vision of Lila vs. Parthalan.
The mythology of the fae is vague enough it left me lots of room to create my own twist on them. Unusual abilities, unique cities with living houses, and my own reasons for the original division of the fae. I’m really happy with how it turned out, especially now since I’ve finished the trilogy and can see it from beginning to end.
What’s your favorite supernatural race? I’d love to hear your thoughts.

MGO: Thank you so much Jocelyn for being here today, I really loved reading your guest post and I will definitely be reading this series, it really sounds like a lot of fun! 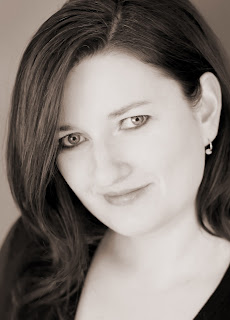 About Jocelyn Adams
Jocelyn Adams grew up on a cattle farm in Lakefield and has remained a resident of Southern Ontario her entire life, most recently in Muskoka. She has worked as a computer geek, a stable hand, a secretary, and spent most of her childhood buried up to the waist in an old car or tractor engine with her mechanically inclined dad. But mostly, she's a dreamer with a vivid imagination and a love for fantasy (and a closet romantic — shhh!). When she isn't shooting her compound bow in competition or writing, she hangs out with her husband and young daughter at their little house in the woods.
Connect here:
Facebook
Goodreads
Twitter
Website
Blog

Also don't miss the first book in the series The Glass Man!

Synopsis:
Lila Gray is just a human—at least that’s her mantra when she accidentally topples a building or bends a paranoid local's gun into modern art. That she can sense and control the minds around her doesn’t prove anything, either. Unwilling to put others at risk, she hides in the wilderness from the beautiful creature who hunts her, one who sees her as his ultimate prize.

Alone, the egocentric Glass Man can kill with a thought. Mated with Lila, he's a supernatural weapon prepared to annihilate the humans he loathes.

Caught in the Glass Man’s latest scheme, Lila is plunged into a hidden fae realm, faced with a secret birthright and a forbidden romance.

With the Glass Man threatening everyone she loves, can Lila accept who she is in time to end his bloody reign? Or will she succumb to his dark power and become the vehicle of destruction for the human race?
Posted by Kindlemom at 3:00 AM