Today I have a special guest post by author J.G. Faherty.

Thank you for being here today J.G.! 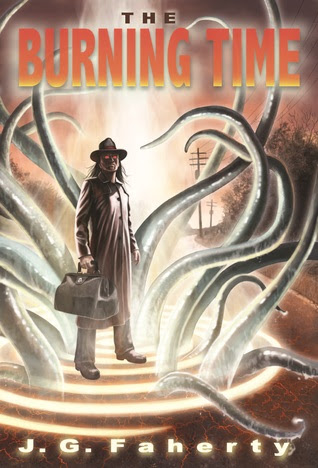 Book Description:
Wherever The Stranger goes, evil follows. Wild dogs roam the fields. Townspeople turn on each other in murderous fury. Innocent women throw themselves off bridges. Swimmers disappear, victims of a deadly beast that haunts their waters. And the worst is still yet to come. The Stranger plans to open a gateway to the nether realms and release the Elder Gods to bring forth Chaos on Earth.
Only one man knows the truth, a country mage whose family has fought The Stranger before. But can he defeat his ageless enemy before Hastings Mills is nothing but a smoking ruin and the townspeople become unwilling blood sacrifices to the Old Ones? With only the help of a young woman and her teenage son, he will have to use all of his arcane knowledge to thwart his adversary and prevent the final apocalypse.
In Hastings Mills, The Burning Time has arrived.

About the Author:
JG Faherty grew up in the haunted Hudson Valley region of New York, and still resides there. Living in an area filled with Revolutionary War battle grounds, two-hundred year-old gravesites, ghosts, haunted roads, and tales of monsters in the woods has provided a rich background for his writing. A life-long fan of horror and dark fiction, JG enjoys reading, watching movies, golfing and hiking with his wife and dogs, volunteering as an exotic animal caretaker, and playing the guitar. His favorite holiday is Halloween (naturally), and as a child, one of his childhood playgrounds was an 18th century cemetery.
JG’s first novel, CARNIVAL OF FEAR, was released in 2010. His next book, THE CEMETERY CLUB, is due out in late 2011. His other credits include more than two dozen short stories in major genre magazines and anthologies.
If you see him at a horror convention, feel free to buy him a Guinness

Just, "Why do you write horror?"

It's as if no one can understand how a person could want to write something scary. Yet here's the kicker: right now, horror is the fastest-growing genre among YA readers, and it's also gaining in popularity again with adult readers, many of whom don't realize they're actually reading horror because the big publishing houses are calling it by other names – supernatural adventure, paranormal romance, suspense-thriller.

So today I have decided that from now on, I'm going to turn the tables and respond to that question with one of my own: "Why do you read horror?"

I mean, think about it. I'm a writer of horror. I'm doing an appearance at a library, or a book store, or a conference. You're there to see me, maybe to hear me do a talk or a reading, maybe to get a book signed. You're reading this very blog right now. That means you read what I write.

So, why do you do it? What is it about horror that tickles your fancy? Do you enjoy being scared? Get a thrill from the suspense of not knowing what's going to happen next? Feel a nostalgia to your childhood when the vampire or werewolf is stalking its prey, and you remember those books or movies you enjoyed so much as a kid? Is it the blood and guts or the glimpse of the mysterious figure that keeps you turning the pages?

I can tell you what it is for me: it is all of the above and more.

My love of horror harkens back to the early days of my childhood. I wasn't even ten yet when I discovered The Hardy Boys, and fell in love with their combination of mysteries to solve painted with a few strokes of the supernatural. If you think about it, years later when Scooby-Do arrived on our TV sets, it was just The Hardy Boys if Frank and Joe and their friends were also stoner hippies instead of uptight, straight-laced do-gooders. Same kind of mysteries, same kind of supernatural twists that always turned out to have rational explanations.

Around that same time, I was also an avid fan of anything spooky or scary on television. Creature Features, a Saturday-morning show that played nothing but classic horror and sci-fi films, everything from Frankenstein to Them! to Godzilla to the great Hammer movies. Chiller Theater, with its crazy six-fingered hand rising from the ground, which played similar films. From there I moved on to more profound literary works: Poe, Shelley, H.G. Wells, Stoker, Shirley Jackson, Lovecraft. I also started to read sci-fi, which I got started on because of my love of Star Trek, The Outer Limits, and Twilight Zone – all of which had definite horror components to their stories. I read a lot of sci-fi: James Blish, Alan Dean Foster, Piers Anthony, Robert Heinlein, Frank Herbert, Roger Zelazny, David Gerrold. I dipped my toes in the fantasy pool, checking out Karl Edward Wagner's Kane stories and some of the books by Anne McCaffrey and Tanith Lee. I might have stayed rooted in those realms, with their mix of science, horror, and magic, if another writer hadn't come along to put me on a new path:

The first book by King that I read was 'Salem's Lot, and that was it for me. I was hooked. I'd never stopped watching horror movies; rediscovering horror books was like opening the closet door and seeing a forgotten world waiting for me. I didn't just start reading horror again. I devoured it, putting aside all other genres as I struggled to keep up with all the terrifying books – good and bad! – that were coming out in the 1970s and 1980s. These were the years of high school and college for me, and I spent a lot of my free time reading. In fact, it was rare that I would go somewhere without a paperback in my pocket, to read at lunch or between classes or in bed. TV fell by the wayside, as every night I drifted off still turning pages.

There were countless writers back in those golden days: King, Peter Straub, Dean Koontz, Robert McCammon, F. Paul Wilson, Thomas Monteleone, David Morrell, Ramsey Campbell, William Blatty, Poppy Z. Brite, John Farris, Christopher Golden, Scott Ciencin, Tracy Briery, Rick Hautula, Brian Lumley, Fred Saberhagen, Charles Grant, Kathe Koja, John Skipp, Karen Taylor, Chelsea Quinn Yarbro – the list could go on and on. Some of these writers also traveled in the sci-fi lanes; some put out dozens of books (and continue to write). Others were one or two-hit wonders. Some were great, some were cheesy. But I gobbled them all down and still remained hungry for more.

I think, at the most basic level, that I enjoy escaping from the regular world. If I want to read about serial killers, shootings, kidnappers, and epidemics, I can just pick up a newspaper or magazine. I want something that is different, something that involves the imagination rather than just current events. And I am enamored of monsters and supernatural occurrences. Vampires, werewolves, ghosts, monsters, cryptozoological creatures, mythical beasts – you name it, I like it. I do not enjoy torture porn horror, which simply involves madmen going grossly berserk on their victims. I'm not even that much of a fan of Jason or Leatherface or those types of supernatural baddies, because they're really nothing more than indestructible serial killers. Silence of the Lambs on steroids, if you will.

No, I want real supernatural. Give me a Frankenstein or a mummy, not a Jason or Michael Meyers. Give me Dracula. Give me a haunted house. Give me a creature in a lake that rises up to steal the livers of innocent virgins at midnight. Give me succubi, aliens, reanimated dinosaurs, mind-altering clouds, the devil in a suit.

Just as important as the escapism aspect, there is also the thrill of the building suspense, the creepy stalking through the fog, the terror of the unknown around the corner. It's the same adrenaline-stoking buzz other readers get from a fast-paced action adventure or murder mystery or western; the same pulse-pounding effect that other readers get from a steamy romance.

On top of it all, reading horror allows me to experience a multitude of genres at once. Romance (The Vampire Journals), Sex (the Anita Blake series), Police Procedural (Inheritance), Coming of Age (Something Wicked This Way Comes), Religion (Rosemary's Baby), Mystery (Murders in the Rue Morgue), Science Fiction (The Tommyknockers), Comedy (Wolf Hunt), Mystery (The Kult)...heck, you pick a genre, there are horror books that incorporate it.

Look at my own novels and stories:

Ghosts of Coronado Bay – a paranormal romance with ghosts
Carnival of Fear – it has zombies, Frankenstein, vampires, Satan, time travel, science fiction, and more
Graduation – a short story blending sword and sorcery and horror
Uninvited – a short story with a mix of sci-fi and horror
The Great Zombie Invasion of 1979 – a short story that is a laugh out loud zombie tale

So that's why I read horror – because it encompasses the best of all worlds, it brings me back to my childhood, it allows me to escape the real world for a while, and it gets my heart pounding.

But most of all, I read it because I love it.