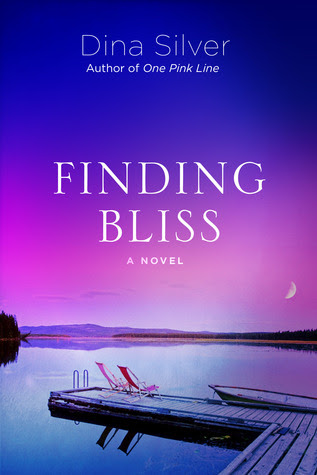 Author: Dina Silver
Series: Sequel to One Pink Line (but can be read as a stand alone)
Published By: Amazon (July 16, 2013)
Source: ARC Copy Provided by the Publisher (in exchange for an honest review)
Genre: NA/adult Contemporary Romance
My Rating: 3.5 Stars!

Growing up with an alcoholic single mother, she has seen her share of heartbreak and disappointment, and is striving to build a new legacy for herself. After graduating from college, she takes a job working as a summer girl for the Reeds––a wealthy, accomplished family that personifies her American dream. Her summer takes an unexpected turn when the Reeds’ eldest son Tyler, the star quarterback for Notre Dame, shows up and turns her life upside down.

An ambitious young woman with a wry sense of humor, Chloe never imagined herself as the type to succumb to the looks and charms of the hometown hero, but she falls hard for Tyler, and is devastated when they part ways at the end of the summer. As she heads off to law school, Chloe tries to convince herself this was just a fling, but she can’t quite get over him. It’s not until Tyler contacts her out of the blue late one winter night that everything changes.


After doing everything in her power to build the perfect life, Chloe soon learns that there are things beyond her control. She must draw on inner reserves of strength as her life takes unpredictable—and sometimes heartbreaking—twists and turns, and she finds herself faced with decisions she never thought she’d have to make. Poignant, heartfelt, and emotional, Finding Bliss is a reminder that you don’t have to live a fairytale life in order to have a happy ending.


My Thoughts and Review:
I became a fan of Ms. Silver's after joining a blog tour for her novel Kat Fight earlier this year and when I had the chance to read and review another one of her books, I just knew I had to jump at the chance.

I have to say, I love that this wasn't a sappy love story but something very much what holds true to what most young love stories are, gritty, raw, exciting, emotional and they don't always end with a happily ever after. I love that the author made this as real as it was. I know I keep using that word, “real” but I can't help it, it explains this book so much better than any other word could.

I enjoyed Chloe's voice as she tells us about her love affair with Tyler Reed, the boy she fell in love with from afar. The boy that would change her life forever, for the better and the worse.

I wish I could say I loved the Reed's but the truth of the matter is that I didn't, not at all. Their only redeeming grace where the twins Sammy and Sarah and even then, we don't really get a lot of them since they aren't hugely significant to the storyline.

Mrs. Reed was horrid and Dr. Reed even worse. I have never meet two potential parents that were so involved in their son's life and so absent at the same time. So snobby and pretentious, so heartless and overbearing. No, I had no love for the Reeds.

I wish I could at least say I loved Tyler but the truth of that matter is that I never did. I never did warm up to him like I wanted to. Instead, I couldn't help but root for Cam, Chloe's friend, confidant and the one man that was there for her through it all. Her support, her sanity and her best friend.

This was a great coming of age story, but not just a coming of age story but also a story about one woman's journey to finding her bliss. Finding the things that made her happy and grabbing on to them, even when those things weren't the things and even the people she first thought they would be. About going after your dreams and not letting anyone or anything stop you from achieving them. About learning when to let go and when to grab on and hold tight.