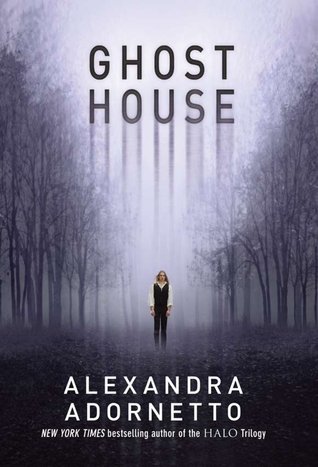 
Book Description:
From the New York Times bestselling author of Halo comes the start of a beautiful and powerful new series.

After the loss of her mother, Chloe Kennedy starts seeing the ghosts that haunted her as a young girl again. Spending time at her grandmother's country estate in the south of England is her chance to get away from her grief and the spirits that haunt her. Until she meets a mysterious stranger…

Alexander Reade is 157 years dead, with secrets darker than the lake surrounding Grange Hall and a lifelike presence that draws Chloe more strongly than any ghost before. But the bond between them awakens the vengeful spirit of Alexander's past love, Isobel. And she will stop at nothing to destroy anyone who threatens to take him from her.

To stop Isobel, Chloe must push her developing abilities to their most dangerous limits, even if it means losing Alex forever… and giving the hungry dead a chance to claim her for their own.

Never let it be said that I don't love a good ghost story. It doesn't matter the time of year, season, or whether it is night or day, I love them, sometimes crave them and seek them out every chance I get.

This has all the aspects of a good ghost story, without being so gruesome or frightening it is hard to stomach or will keep you up at night.

It will give you the chills and make you guess, maybe even creep you out at times but it isn't overly done or dramatic. With a setting ripe for the taking and a good haunting to take place, really you can't go wrong with this one.

Except, that it slightly did go wrong. It maybe was a bit too mild at times and the romance had a nasty habit of taking over the storyline and although it had a grand setting fit for a fabulous gothic feel, very little atmosphere was established and set for the story to really take root and thrive.

The story did get more solid as it went but still never lived up to it's expectations.

I can see a younger audience really liking the romance aspect and of course the unforeseeable cliff hanger at the end is sure to draw people back to read the second book simply because they are curious to see where the story will go from there but I don't think I will be one of them.