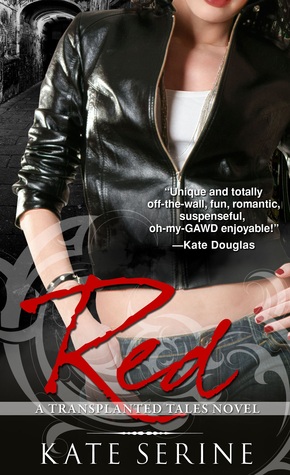 Book Description:
“My name is Tess Little. But everyone calls me Red.”

Once upon a time, a spell went awry, stranding Make Believe characters in the ordinary world. Since then, Tess “Red” Little—a/k/a Little Red Riding Hood—has worked as an Enforcer for the Chicago branch of the Fairytale Management Authority. But, consider yourself warned—she’s not just some waif with a basket of goodies. All grown up and with nothing to lose, a gun and combat boots is more her style. And Red’s new assignment threatens to be short on happily ever afters…

Someone is murdering transplanted Tales in gruesome fashion. The list of fictional characters capable of such grisly acts is short and includes more than one of Red’s old flames. And if that wasn’t bad enough, there’s another complication, in the form of sexy, enigmatic Nate Grimm, the FMA’s lead detective and part-time Reaper. Used to following her own rules and living life on the edge, Red has managed to avoid taking on a partner until now. But Nate’s dark side makes him perfect for a case like this. That is, if she can trust him. Because if there’s one thing Red knows for sure, it’s that believing in the wrong person can have big, bad consequences…

I love retellings and if you asked me why I wouldn't even be able to tell you except that maybe since the magic is gone from the reading the story the first time, I maybe hope to recapture that say magic from reading it a second, only this time having it be different. New surprises and twists and maybe even a new outcome. Same beloved characters in a slightly altered reality.

I loved the whole theme of this one, fairy tales creatures and literary characters coming out of the pages and into the real world. The good, the bad, and even the ugly.

I loved how they had to blend in and adapt. How they dealt with their fairy tale persona as well and who they were in the real world now, trying to act human while not being at all.

Most of all, I loved Grimm. He was a kick butt character that I just couldn't get enough of. I wanted to know more about his mysterious past and how he came to be a reaper, I wanted to know everything about him. Sadly we really get very little history from him but bits and pieces here and there.

Red, hmm, what to say about her? She is fierce and pretty kick butt (in most ways, definitely as an Enforcer, not so much in her real life) but like all the Tales in the story she has some serious issues and hang ups, even though I liked her, at times she was pretty wishy washy and that bothered me a little and I had a harder time connecting with her than I would have liked but I did eventually connect with her and grow to really like her.

There were some pretty fascinating crazy messed up characters in this and I loved that about this story. It was fast paced and action packed, it never lacked in the mystery department or in adventure and I will definitely be continuing on with the series.